A Dictator’s Day in Court 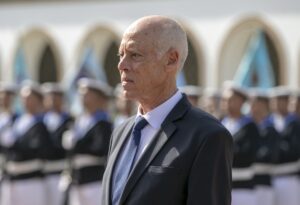 Tunisia’s president is looking to strengthen his chokehold on the country.

As much of the world trains its eyes on the looming crisis on Ukraine’s border, Tunisia’s Kais Saied is stepping up efforts to consolidate a dictatorship in what, for the last decade, had been widely hailed as the Arab world’s only democracy. At midnight on Saturday, February 5, Saied appeared at the Interior Ministry and delivered a speech calling on Tunisians to demonstrate for the closure of the High Judicial Council (HJC)—the body charged in the country’s 2014 Constitution with maintaining the independence of the judiciary. After months of attacking the judges for supposedly serving partisan and moneyed interests and calling for the “purification” of the judiciary, Saied finally made his move, urging people to take to the streets. He declared that “it is our right and your right” to dissolve the HJC, describing the body as a “thing of the past.”

What has followed illustrates the decay of the rule of law in Saied’s Tunisia. Although the president had yet to issue an official decree closing the HJC, police were dispatched quickly to the council’s headquarters to bar its members from entering. The small group that heeded Saied’s call to demonstrate in support of his attack on the judiciary were spared the brutal policing administered to many who had protested against the president on January 14. Saied continues to maintain that he is not a dictator and frames his actions as consistent with the law. But if he assumes the powers of the HJC as he intends, his obliteration of the constitutional separation of powers will be nearly complete. Although Saied pledges a return to constitutional order through the drafting of a new constitution this year, followed by a July 25 referendum and December 22 elections, establishing control of the judiciary would allow him to govern as an unconstrained dictator.

In launching an attack on the HJC, Saied is once again targeting an institution that many Tunisians have grown to distrust—in large part due to his frequent criticism. Characterizing the judiciary not as independent but rather as beholden to wealthy and partisan interests, Saied has also pointed to its failures to prosecute corruption and alleged electoral crimes. Many of the opposition figures who now criticize Saied’s move also acknowledge that the judiciary badly needs reform. Indeed, Saied delivered his speech on the ninth anniversary of the assassination of leftist politician Chokri Belaid, a murder for which responsibility remains painfully unresolved. Critics of the judiciary accuse it of willfully disregarding evidence and stalling the investigation, perhaps to protect the Islamists they presume to be complicit. Saied paints the HJC as an institution that protects corrupt judges who block the delivery of justice.

But Saied is not motivated merely by reasonable disappointment with an underperforming group of judges. His move to dissolve the HJC also stems from the body’s recent efforts to constrain him. Since assuming power, Saied has drawn fire from opposition politicians for failing to address the country’s mounting economic challenges. The main exception is a proposal to allow those accused of corruption to escape jail time by investing in impoverished regions. Saied recently proposed that the scheme would be adjudicated by a special court whose members he would appoint and oversee. After reviewing the president’s plan, the HJC issued a January 11 statement that the state of exception invoked by Saied had not given him the authority to infringe upon the judiciary in this way. As such, the HJC offered a rare rebuke of the president’s expansive view of his own power.

It remains to be seen whether Saied will be able to pull this off. Speaking before his ministers on February 10, Saied did not issue a decree but did continue to dig in, reiterating that an official decree was only a formality because “Tunisia needs to be cleansed.” In taking on the judges, Saied has reasons for confidence. His repeated power grabs have failed to galvanize concerted opposition. And months in power have allowed him to appoint loyalists to key positions in the administration and security apparatus. Public-opinion polls have generally shown that Saied maintains majority support, including a recent poll by Sigma Conseil indicating that nearly 60 percent would vote for him for president and a recent poll by Alexandra Blackman and Elizabeth Nugent put Saied’s support at 80 percent.

But Saied also faces stronger headwinds than he did when he froze the legislature last summer. Tunisia’s lawyers and judges are well organized and have shown solidarity in the past. As recently as November 2020, the judges’ association held a monthlong national strike. Following the police closure of HJC headquarters, the president of the body declared its intention to convene elsewhere and the judges’ association announced a two-day strike starting February 9. The solidarity of the judges will be tested by the fact that that those who break ranks and praise the president’s moves might be rewarded professionally if Saied has his way. But the strike has reportedly garnered high participation and forced the closure of many courts. On February 10, the judges, joined by allies, held a protest outside the main court in Tunis. Adding to this domestic opposition is growing pressure from abroad, including by the G7 ambassadors, who have expressed their “deep concern.”

There are reasons to wonder whether the president’s support is softening. His calls for Tunisians to demonstrate for the closure of the HJC did not galvanize many to take the streets. More striking, few Tunisians have participated in Saied’s “national consultation,” a glorified public-opinion poll that the president paints as an exercise in direct democracy. Nearly a month after the voting opened, the number of participants is just around 5 percent of the number who voted in the 2019 legislative elections. Saied’s quixotic project of “correcting the revolution” may no longer arouse intense support, especially during a time of intense economic crisis. Prolonged inflation continues to sap purchasing power. In recent weeks, consumers have faced chronic shortages in basic goods. With the state lacking financing, many public-sector workers are experiencing delays in getting paid. The government concedes that it badly needs to cut a deal with the IMF. With Tunisians facing real hardships, some in the opposition hope that the people will blame the man who six months ago declared himself their savior.

For now, Saied’s supporters offer conspiracy theories positing that delayed paychecks are actually the work of Islamists in the state seeking to kneecap the president. And they also emphasize that although Saied has perhaps failed to deliver thus far, he has not been given the ten years supposedly afforded the Islamists. Meanwhile, those who oppose Saied are finding it difficult to fashion an appealing alternative. They are hamstrung by the bitter memories many Tunisians harbor of the troubled period before Said’s assumption of extraordinary power. As was the case during the time of Ben Ali, non-Islamist opponents of Kais Saied face the dilemma of deciding whom they detest more, Islamists or the dictator. And today, unlike in 2010, “democracy is the solution” may not be enough of a rallying cry.

Nate Grubman is a teaching fellow in Civic, Liberal, and Global Education at Stanford University. His research focuses on party systems, ideology, nostalgia, and corruption during transitions from authoritarian rule, and he is currently working on a book about Tunisia’s party system after the 2010–11 uprising.